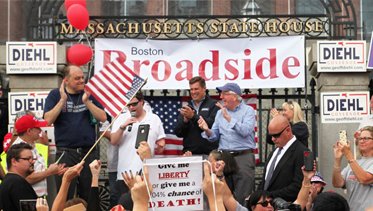 “This poll confirms what we already knew when we entered this race,” said Diehl. “Our current Governor seems to be out of touch with the needs of the people of Massachusetts and, for some reason, is also unable or unwilling to support members of his own party who want provide people with greater economic freedom and more control over the healthcare and education choices for their families.

Even worse for Baker, often promoted as “the most popular Governor in the country,” is that Massachusetts Republicans don’t believe the hype: “Fifty-four percent of respondents to a Public Policy Polling survey of likely 2022 Republican primary voters said they had an unfavorable opinion of Baker, compared to 30 percent who view him favorably.”

“On the campaign trail, I continue to hear frustration from parents, small business owners, first responders, nurses, educators and many others about how the Baker – Polito agenda isn’t working for them,” Diehl explained. “People want to feel like they have a voice, either at work or at home, and with all the added mandates and regulations, it just seems like it’s harder and harder to get back to a sense of normalcy.”

Diehl has been travelling around the state, speaking to people about his positive vision of restored individual freedoms, greater accountability for government and elected officials, and a renewed sense of safety through support of our first responders and those who serve our country in the military.

“We need a Governor who is going to take responsibility for how our state operates,” said Diehl. “Not one who hides behind appointed bureaucrats when issuing harmful edicts on our children, when failing colossally to protect veterans and elderly in our nursing homes, and in kicking the can down the road instead of fixing overdue improvements in public transportation. Massachusetts needs a positive change in 2022 and this poll reaffirms that people see me as a key component for that brighter future.”

Support Geoff in his Campaign for Governor: Donate today! (winred.com)