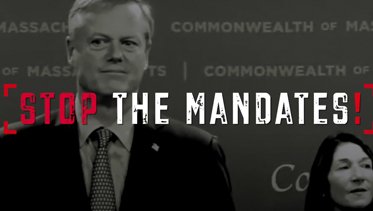 (Whitman, MA – 10/26/21) Geoff Diehl calls on the Baker – Polito administration to stop punishing the heroes who worked through the pandemic by terminating their employment if they are not complying with the vaccine mandates.

Diehl released an ad today: Diehl Ad First Responders Stabbed in the Back by Baker Polito , focusing on the Governor’s flip-flop on this issue, as well as the Lt. Governor’s hypocrisy of saying the administration has State Police’s backs at the recent graduation ceremony last week in Worcester.

Diehl has pledged publicly that, once elected Governor, he will restore the jobs of everyone who was fired and will end the mandates which were enacted after the June 15 lifting of the state of emergency in Massachusetts.

“It’s very simple. Individuals have the right to make their own health care choice related to taking a vaccine which, we’re finding out, is not providing the guaranteed protections promised by government officials. In fact, we’re seeing some very serious adverse reactions occur and its more clear than ever that a medical decision like this should be left between a person and their doctor,” stated Diehl. “This is particularly true when discussing the brave first responders who worked through the pandemic, when a vaccine wasn’t available.”

Meanwhile unemployment numbers came out this week, and Massachusetts is the only state in the country to see an increase in people out of work.

Diehl added, “The Baker – Polito administration obviously consider people who want a say in what’s put in their body as expendable, but there’s only so many members of the National Guard out there to replace all the highly trained law enforcement officials, DCF workers and various state agency employees losing their jobs right now. This mandate is putting at risk the ability for the state to perform the vital services needed by the citizens as we recover from the pandemic.