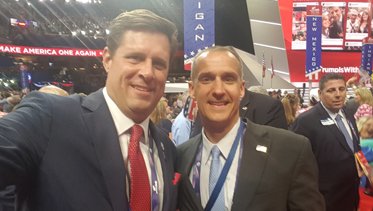 Lewandowski, a Lowell native and longtime Republican strategist, and a veteran of hundreds of campaigns at all levels of government, joined the team in January of 2022. “I am pleased to have Corey on the team and honored that he believes in this campaign,” Diehl said. “Corey has worked on campaigns at every level of government, including the presidential level, and is a key advisor to have in running this campaign.”

Fred Smerlas, former NFL football player (including for the New England Patriots), and his wife, Kristy Smerlas, own several businesses, including a restaurant in Providence, R.I. Orlando, a Gloucester resident, has worked on several campaigns over the past 11 years, in addition to serving as a state committeewoman for the 1st Essex Middlesex District. Rose, who began her career in Boston TV newsrooms as an Assignment Manager and Producer, has run her own public relations company, Peggy Rose Public Relations, for 20 years. She joined the Diehl campaign in January of 2022 as well.

These additions to the campaign team round out a series of individuals working on the campaign in different areas, including marketing, messaging, and fundraising. “Our team has grown exponentially in the past few months and will continue to do so,” stated Diehl. “I’m also gratified by the hundreds of Massachusetts activists and voters who have signed on to volunteer for this campaign, since we first announced in July, in addition to thousands who returned from the 2018 Senate campaign.”

For more information on getting involved with the Diehl campaign, visit www.geoffdiehl.com.