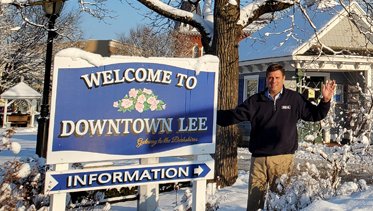 “For much of our history, all of the focus has been on Boston. And, as the Hub’s name implies, a lot of that attention is well-placed and should continue. But, it’s time for us to branch out,” Diehl said. “We need to focus on development in communities outside of Boston, particularly along our South Coast and in the western part of the state. It is important for each region of our state to have sufficient infrastructure to support development, and that each region shares in the allocation of available resources.”

Speaking with local business leaders at the Chamber of Commerce in Lee, Diehl acknowledged challenges western Massachusetts is facing with its infrastructure. He stated his support for improved transportation networks, including funds to support road, bridge, and culvert upgrades, as well as his support for the West-East rail link. He also expressed support for spending on upgrades to municipal buildings, as well as making sure families and businesses across the state have access to high-speed Internet. “As we see a once-in-a-generation infusion of federal resources to support infrastructure improvements, we need to make sure those dollars are allocated to projects all across the state and that they are spent intelligently.”

According to Diehl, it’s not just important to fund repair of aging infrastructure, it is also important that repairs upgrade infrastructure to modern standards that will achieve sustainability for years to come. “I’m committed to funding the repair of highways, railways, bridges, dams, and tunnels statewide,” Diehl said. “I believe we should be improving our infrastructure using the latest technology, employing new methods and materials to upgrade our networks to modern, sustainable standards.”

Diehl’s comments came as he visited several western Massachusetts towns today on the first stop of his “Berkshires to Boston Tour.” Among the stops on Diehl’s visit were a meeting with business leaders at the Chamber of Commerce in Lee, a tour of the Farmhouse Deli Factory in Great Barrington, and a town hall with area residents at the American Legion in Dalton.

According to Diehl’s campaign, the candidate intends to visit every county of the state in coming weeks to have a conversation with Massachusetts residents about issues that concern them, including regionally-important matters. Diehl also recently released a policy framework entitled, “The People’s Priorities,” expressing priorities he pledges to focus on as Governor. One of the stated priorities is infrastructure investment.

“I value the opportunity to speak with people about these issues right in their hometown, and to have a conversation about what worries them and how we can better address these challenges once I am elected Governor,” Diehl said. “People should know that I intend to make connecting with western Massachusetts more than just a one-day, one-stop event once I become Governor. We’re going to keep focusing on regional needs and people can expect to see us taking an active role in supporting western Massachusetts and priorities that matter to its residents.”